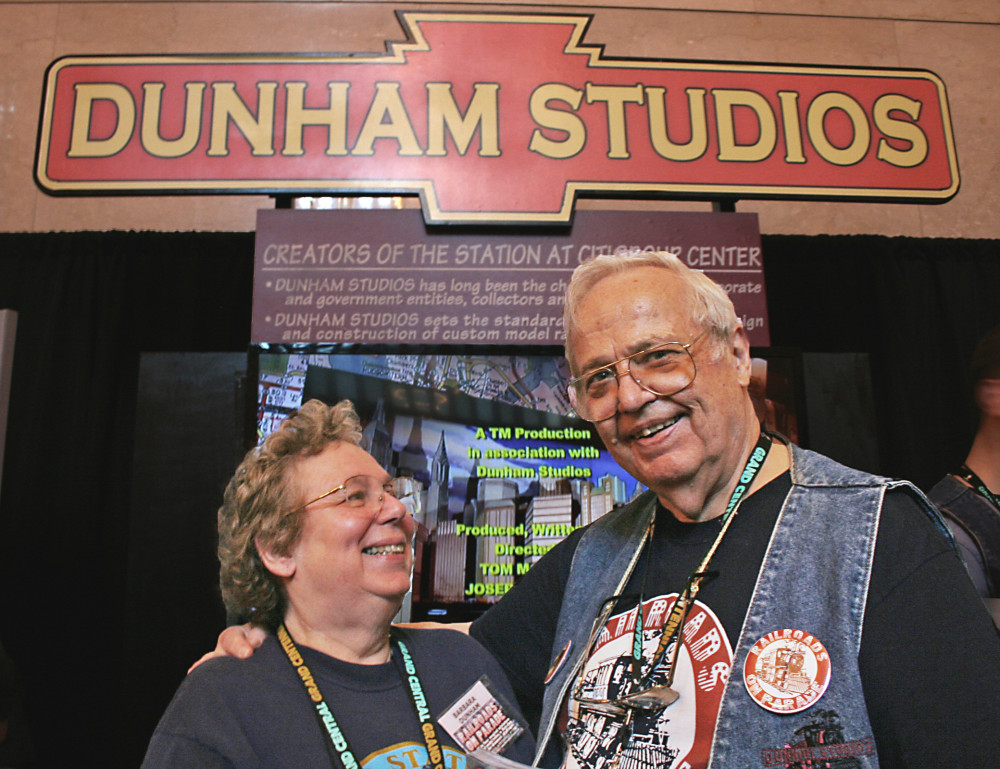 DUNHAM STUDIOS is a most interesting partnership reflecting the diverse talents of the partners, Clarke and Barbara Dunham.  The Dunhams, long active in art and theater, have been involved with some form of design or display since their marriage as teenagers in Philadelphia over forty-four years ago.  But in 1987 at the height of his Broadway design career, when his creation of Citibank Station became an instant New York “Holiday Tradition”, model railroading, which had been Clarke’s occasional hobby, took over their lives.  In the last twenty five years their studio under Clarke’s design influence has produced beautiful, elaborate layouts for Valley Junction Train Museum (Des Moines, Iowa), Western Heritage Museum (Omaha, Nebraska), America’s Railroads on Parade (Williamsburg, Va.), the Railroaders’ Memorial Museum in Altoona, Pa., the Cincinnati Museum Center and a select group of private and corporate clients from Maine to California (and as far away as Kazakhstan). These amazing worlds in miniature have been covered in publications ranging from Model Railroader, Classic Toy Trains and O-gauge Railroading through Smithsonian Magazine to Cigar Aficionado and have been seen on CNN’s “Entertainment This Week“,  ABC’s “VIEWS“, the CBS Evening News, NBC’s “EXTRA“, FOX, and PBS’s “TRACKS AHEAD“.  The Dunhams have produced four remarkable children all of whom do grown-up things (a White House Correspondent, a Washington Editor, a Philadelphia lawyer and a Virginia teacher of drama) while their parents continue to play with trains!  Clarke’s reemergence in the world of theater and music predict a more balanced participation between trains and theater for the Dunhams in the near future.