Some wonder how or why it is that grown men spend so much time, energy and money on toy trains. In this article, I’m going to attempt to explain how I got to Alamoosook Junction, the layout and display featured here. It’s not an unusual route. My re-immersion into our hobby followed what I’d guess is a “normal” path. I owned and enjoyed trains as a child. Sometime in my mid to late teen years, I discovered girls and cars. Then it was off to college, a new job and family. The good news here is my mother didn’t give the trains away or sell them at a yard sale. I did sell the ZW despite my father’s objections. As a young family, Christmas was usually at one of our parents’ homes. Some years there would be a train, but many times there was just a tree. Sure, we’d put my Lionel 1453WS set under the tree when we celebrated Christmas at our own house, but that was sporadic and certainly didn’t constitute any serious interest in our hobby.

Although I can’t pinpoint the exact date of my re-entry into toy trains, I think it coincided with our oldest child going off to college. In our family’s development it just happened that the two oldest children (both girls) left the nest at about the same time. One went off to a boarding preparatory school while the other was in college. The house we lived in at the time was a great big old house, and consequently there were no turf battles. It also had a sprawling basement with an honest to goodness billiard table in one of the rooms.

Since the billiard table was infrequently used for its intended purpose, a couple of sheets of plywood got me started on my first post-puberty layout. The 622 NW-2 switcher ran beautifully; milk was delivered about as reliably as ever (not very); most of the accessories and rolling stock left over from the late ’40s to mid-’50s worked reasonably well. Not bad for about 40 years of inactivity.

But something was missing. Nothing about this layout conjured up images anything like Bob Sherman’s art. Maybe I didn’t have the right trains running. So you can see how it was not too difficult for another collector to enter the post-war market. Unfortunately, at about this time, a cardiac episode and a career switch resulted in relocation and a new house. No more sprawling basement. So, my rediscovered hobby simmered for a few years. I’d go to an occasional train meet and did a fair amount of easy chair railroading. However, nothing re-sembling a showroom layout mag-ically appeared, and it seemed that I might not realize my fantasies. 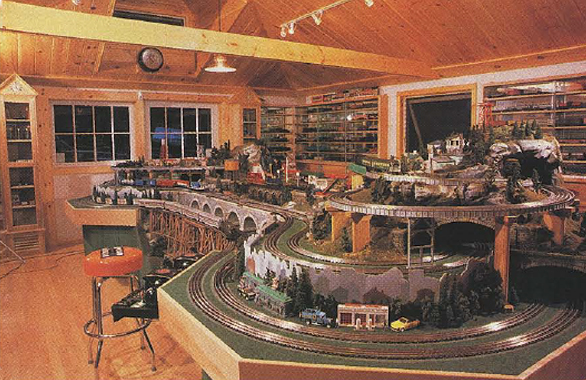 During this period my wife, Mollie, had been looking for a suitable summer home, as she wanted to escape from the heat and air-conditioned climate prevalent in central Kentucky. Rather by coincidence we found a lakeside cottage camp not too far from Bangor, Maine. Among the virtues of this place ‘was a freestanding, somewhat over-sized two-car garage. Since the house was clearly Mollie’s house, without too much persuasion this building was earmarked for trains. Working with a local architect display, workshop and operating requirements were outlined. The space that ensued is, if somewhat immodestly I do say so, really very nice. Display areas around the interior perimeter include a visually appealing combination of horizontal shelving for rolling stock and vertical dock towers for signals and smaller accessories. Along one wall a series of glass drawers allow room for some larger accessories and viewing from all angles. There was even room for a small office space, so I could stay connected to my business while in Maine. 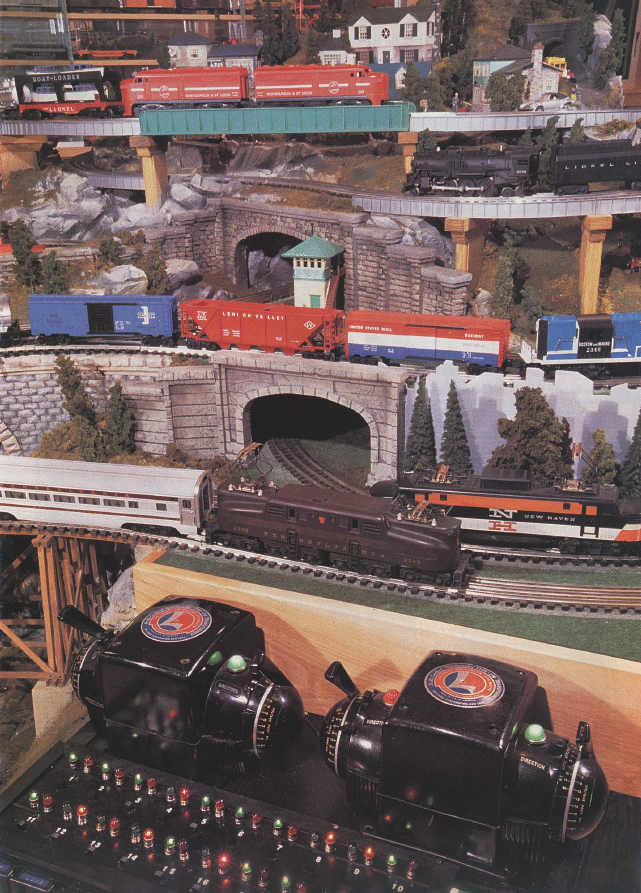 Details like ballast on the display shelves, copper flashing under the cedar shingle roofs of the clock towers, a “track” on the floor that is visually represented by a mahogany stripe in the oak flooring, and portal-like archways cut through the upright supports for the shelving all add to the visual appeal of the space.

Finally, an appropriate venue for my post-war treasures.

When I was convinced the building and cabinetry were proceeding on schedule, it was time to turn my attention to the layout. A little research produced a list of seven individuals/companies that might be interested in building my dream layout. I drafted a preliminary request for proposal and sent it off. Three solid contenders emerged, but in the final analysis Clarke Dunham of Dunham Studios seemed to provide the best combination of price, reputation and schedule. 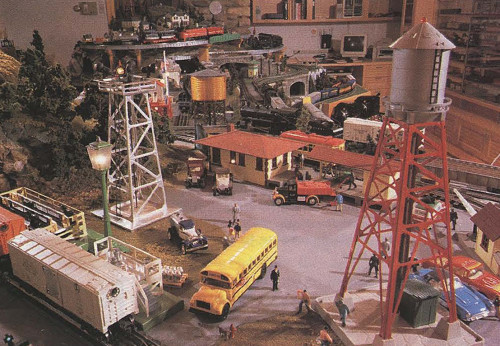 A series of give-and-take sessions with Clarke eventually produced drawings that gave me the operating attributes I sought (double-main, multiple-train operation, reversing loops, trestles/bridges and grades) and provided enough flat space to locate several of those cantankerous operating accessories.

Things went along nearly on schedule, and an installation date was picked. Completely assembled at the studio, the modular construction allowed for fairly straightforward shipping and reassembly in the layout’s newly completed home. The installation went reasonably well, with normal electrical/electronic gremlins excepted.

Elapsed time from Mollie’s OK to commandeer the garage to layout completion was about two years. However, in my opinion it was worth the effort and the modest bud-get overrun. Alamoosook Junction and the building that houses it reflect my own split hobby personality. I can’t decide if I am an operator or a collector, so this place allows me to do both. For example, the display case in my office has a 50-gang car running back and forth across one shell; and I will run anything in my collection that runs. Part of the reason I’m willing to do that is because I continually try to remind myself that these 40- to 50-year-old treasures are toys. As such, they should be played with and used the way Lionel intended. That is, of course, some-times easier said than done. 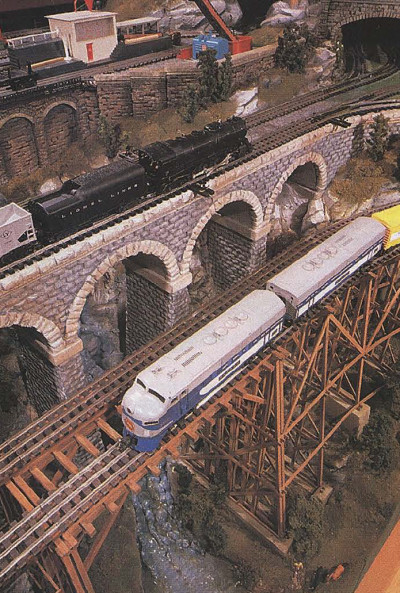 My collection has reached the point where I’m upgrading existing holdings or adding boxed sets here and there. I am very fortunate to have three spots to display parts of my collection: Alamoosook Junction, our home in Kentucky and my office.

As most people even tangentially involved in our hobby know, there are few pleasures that match the feeling associated with seeing the eyes of youngsters when they enter my (or your) train room. Give them free rein (when they’re old enough) to operate everything, then sit back to watch the twinkle in their eye as they become master of the make-believe world under their control.

Somehow I was not able to pass along my love of trains to our children. Occasionally, my son does go train hunting with me, but I think he’s humoring his father. However, there is a better-than-even chance I’ve got at least one of our grandchildren hooked. Phineas is 5, and there’s a shelf in my train room that has his trains on it. It’s the sparkle in his eye that motivates me to create the friendliest toy train environment that I can. With more grandchildren a virtual certainty, I’m trying to do my part to perpetuate the hobby.

I have recently successfully negotiated with Mollie for a little more area in our Kentucky basement. As a result, I’m in the preliminary planning stages of another toy train space. For me, much of the pleasure is in the planning. But unlike Maine, I’m going to do most of the work on this layout myself. That’s just one of the perks that goes along with early retirement.

Oh, by the way, about those negotiations with Mollie: The plans for a new garage in Maine — this one for cars and boats — are about ready to go out for bids. Not a bad trade for additional Kentucky space. 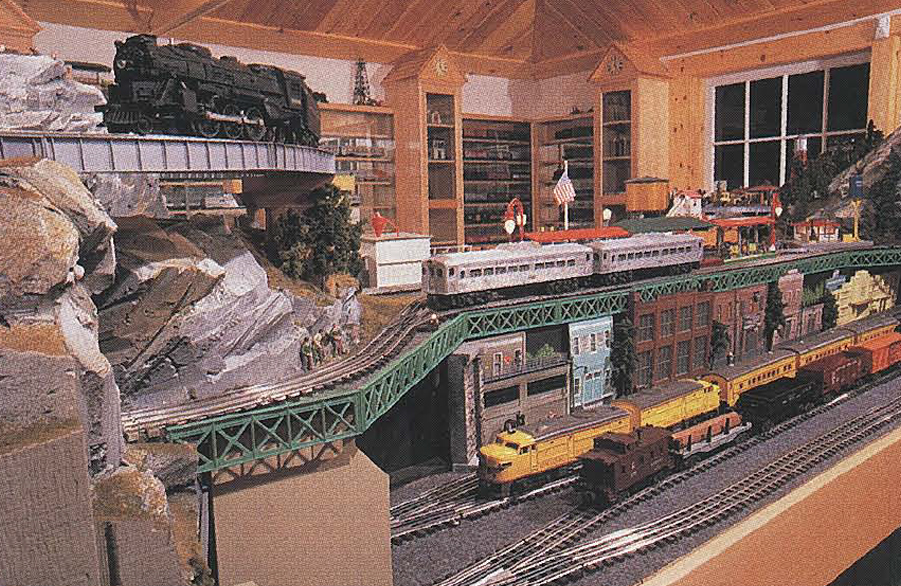 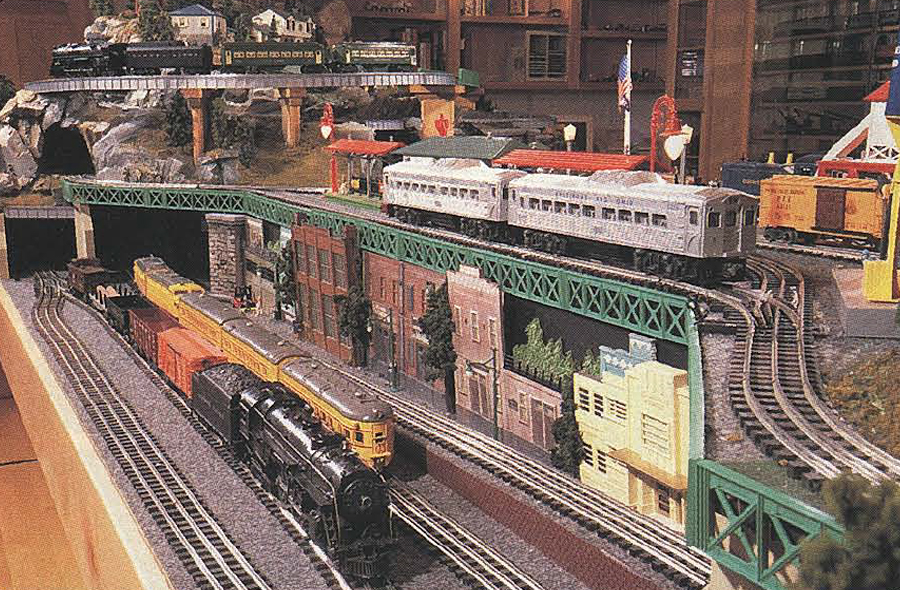