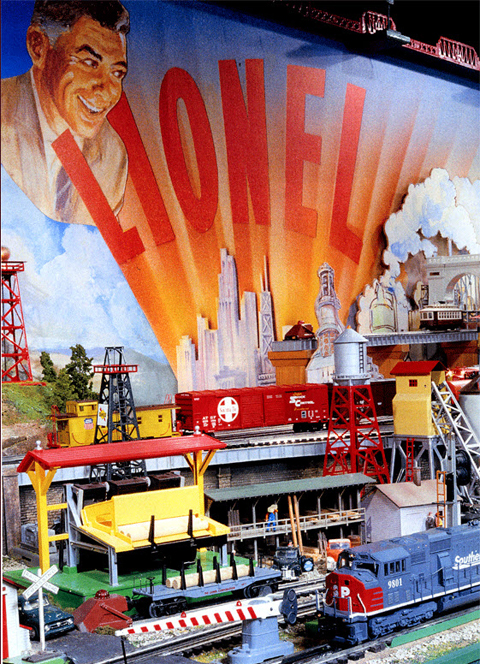 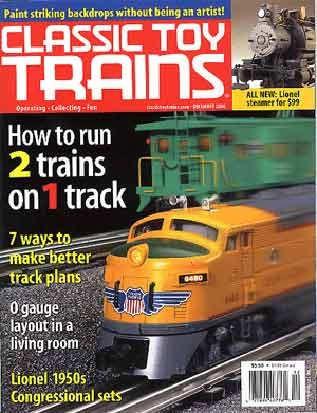 No matter what you call it — dog-bone, dumbbell, or water wings — the shape of Dick Baker’s 0 and Standard gauge layout has many advantages.  For one thing, Dick’s train room stretches over 40 feet and is narrow, so a dog-bone fits right in. For another, a dog-bone shape fit perfectly with Dick’s vision of a layout with distinct scenery segments. It provided Dick with three major areas, ¬the two circular ends and the central connection — all spaced in a manner to keep diverse scenery themes from colliding. 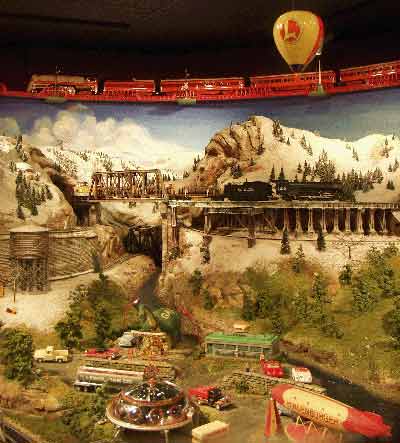 A second and fundamental goal was for the layout to facilitate and express the joys of running toy trains – pleasures Dick has known since receiving his first Lionel set in the 1950s. If a mountainous area was going to be realistic, another, equally prominent section would be as fanciful and imaginative as toy rains and structures allow. “I decided to blend Standard and 0 gauge in a key part of my 40-foot-long train room,” Dick explains.  Reissues of vintage trains would roll by a painted backdrop and slip through prewar-style bridges to suggest what playing with Lionel trains was like in the 1920s and ’30s.  Gradually. Dick formed a vision of the layout he wanted. without knowing it, lie came up with a dog-bone: one area would feature mountains modeled in a realistic hi-rail manner, while the opposite end would capture the fantasy world of toys.  In between would be gently curving mountain lines. where immense mains pulled by double-headed locomotives would look their best. Nearby would be another area intended to highlight the ingenious Lionel operating accessories. “At least one major section had to be devoted to freight loaders and unloaders,” he says. 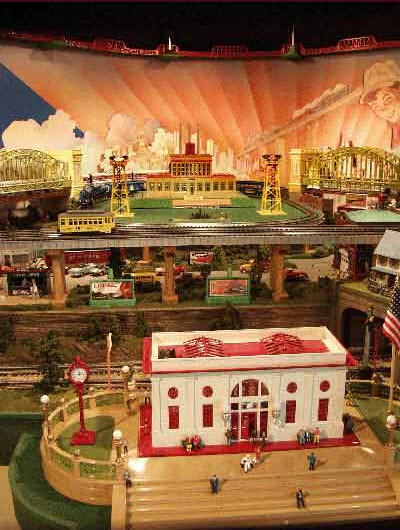 Thrilled to have outlined his goals for a layout and excited about getting started, Dick faced a couple of stark facts back in 2000: His experience constructing model railroads was limited, and the demands of his job meant that he traveled frequently, and therefore layout progress would he agonizingly slow. “At that point. I could either give up my dreams.” Dick says. “or turn to a professional.  I had been impressed with the public layouts constructed by Dunham Studios.  So I contacted Clarke and Barbara Dunham and explained my goals.” The Dunhams listened attentively to what Dick wanted to accomplish. Clarke, a highly respected designer of Broadway musical sets and model railroads, studied the train room. He concurred with Dick on the advantages of a dogbone design that stretched across 40 feet and extended as much as 15 feet from the room’s rear wall.  “A dog-bone permitted my team of artists, carpenters, and electricians to create separate segments that blend beautifully.” Clarke says. “Each end has its own identity: one is hi-rail and mountainous, and the other is toy-like and metropolitan. Next to each other, the trio would look bad; done this way, Dick can meet two of his goals.” Clarke recommended adding multiple levels of’ track. Besides enabling Dick to operate more trains, installing track at different heights increases the visual appeal of a model railroad, regardless of its scale. Visitors look from the fore-ground to the rear and then back to the front. Lingering in the train room, they enjoy the layout more and more. In addition, a multi-level model rail-road provides more space for accessories. That’s fortunate because Dick has so many great original and reproduction Lionel items. Among his favorites are the nos. 97 coal elevator, 161 log loader, 193 industrial water tower, and 955 oil derrick. “We had so many accessories to choose from,” Clarke notes, “that our crew knew we would need a number of different sites for them.”

PUTTING ON A SHOW 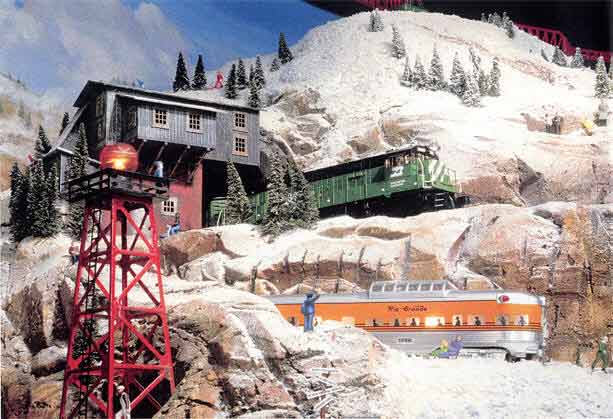 Once Dick and the Dunhams were on the same page, Clarke and his creative team moved full speedahead. Having built many outstanding layouts, both public and private, they know exactly how to assemble benchwork and
roadbed.  The folks associated with Dunham Studios also have firm views about which products work best for them. Trial and error have convinced them to rely on Gar-Graves track and Ross Custom switches operated by Tortoise machines.  The team competed Dick’s layout in a little more than a year, and Dick was running his trains sooner than he imagined. With every one of his original goals realized, his train room became a hub of activity for his family. “Decide what you want to do on your layout that’s the best advice that I can give any hobbyist,” Dick states. Following his suggestions and weighing the advantages of a dog-bone plan will help you design a satisfying railroad. Dick didn’t know ahead of’ time that a dogbone layout would work so well. He discussed with his wife and two children where in their home to build a model railroad, but had no preconceived notions of the size or shape the layout would take.  Dick owned plenty of trains and accessories, but knew an open mind was essential to building a layout. Eager to move ahead, he wisely held off sawing bench work or installing track-planning software.   Dick knew that an overall game plan was necessary first before he could achieve his layout goals. He also vowed to spend ample time preparing his train room with comfortable flooring, adequate lighting, and ample display shelves. To start, Dick wanted parts of the railroad to model different sections of the United States were he and his family have traveled. “My wife Kathy agreed that the layout would mean more if we could point to an area and say, ‘We went t  here for a vacatio n.’”  Dick adds that “since our family has traveled on the old Route 66 in the Mid-west and Southwest, I wanted to find a way 10 bring that experience to life.” Paging through toy train catalogs, he noted that accessories decorated wills dinosaurs, flying saucers, and giants would convey the “weirdness” of road-side attractions the Bakers had seen. 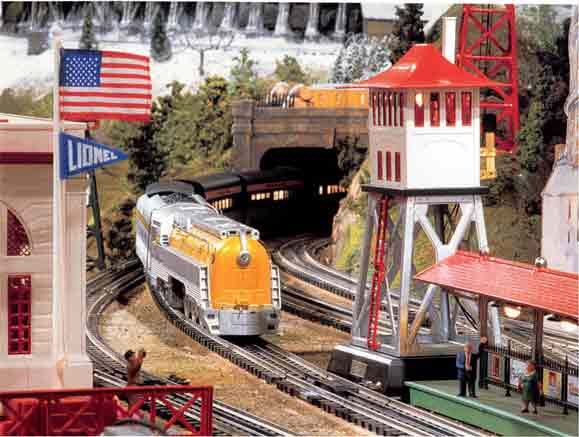